A quick look at the key issues highlighted by our recent survey of AHDS members and what we are doing with it.

Before we get into the detail of what this year’s workload survey, we need to say a huge thank you to all of you who took the time to respond.

Introduction
This article aims to give members some feedback about the 2019 workload and stress survey.  The outputs won’t be a huge surprise to you – particularly the 1164 members who completed this year’s survey in March – as it reports on your working hours and the key challenges you face in your role. However, the purpose is to gather a clear and representative picture of your working life and pressures – it definitely does that!

What the survey results tell us about…

54.4 hours was the average working week reported by members.  That is 19.4 hours in excess the contracted working week of 35 hours.  As one member of the AHDS National Council put it – working contracted hours (i.e. 7hrs a day) members are working an eight-day week!

That is only those who are working at around the average…over 30% of members reported working more than 60 hours per week.

We know that school leaders work long hours because they want the best for their school, staff and pupils.  However, there are many members who work less than this average…if you work more than this average we need to take this opportunity to remind you about the health impacts of working long hours that we quoted in the last edition of Head to Head:

The US Department of Health & Human Services “…found the costs of working too much include:
-    Working >10 hours a day led to a 60% increased risk of cardiovascular disease.
-    10% of those working 50-60 hours a week report relationship problems, and 30% for those working more than 60 hours.
-    Working >40 hours a week is associated with
o    Increased alcohol and tobacco consumption
o    Unhealthy weight gain in men
o    Depression in women
-    Little productive work occurs after 50 hours per week.
-    In white collar jobs, productivity declines as much as 25% when workers put in 60 hours or more.
-    Working >60 hours per week led to 23% higher injury hazard rate (Caruso, Hitchcock, Dick, Russo & Schmit, 2004).”

…workload pressures
Workload issues highlighted a mismatch between resources available and expectations.  Members responded to these challenges in different ways with some suggesting the need for a reduction in bureaucracy while others sought an increase in admin staffing.  Some sought a reduction in the need to cover absences and teacher non-contact time while others proposed protected or additional management time for school leaders.  These issues were common across all years of the survey.  In 2019 the challenges schools face in meeting the needs of pupils were highlighted by more members than in any previous year – this appears to be a serious and growing challenge which is of great concern to members.

Of course, members play different roles in schools and the priorities of members differ depending on where they sit within the school.  The break-down by role shown in the following table highlights the different pressures faced by members.  For instance, while the desire for more management time/roles is very strong across the board, for DHTs this is displaced by the need for ‘Proper support for inclusion’, the need for a reduction in bureaucracy and the desire to provide less class cover for NCCT and absence.  So, while pressures on all roles are similar, they are not the same.

2019: “What would make your role more manageable?” prioritisation by role

…whether people want to become HTs
There has been little movement over the years in the proportion of HTs who would recommend headship – the split of HTs who would and wouldn’t recommend the job is pretty evenly balanced.  Here are two quotes which represent opposite ends of the spectrum when it comes to HT views on Headship:
“I absolutely love my role as HT.  I enjoy shaping the future direction for my pupils and staff, and working with the school community”
“The job has become unmanageable. My personal life is suffering, my health is suffering, and I cannot see a way out of my current work demands.”

However, there has been a significant year-on-year worsening of picture when it comes to DHTs and PTs wishing to become HTs.  There remains a small core who are keen to pursue headship but a much greater and growing proportion who express very strongly that they will not – often due to seeing the impact of headship on their own HT, concerns about the pressures, lack of resources and poor work/life balance.  The graphs below show the worsening perspective of DHTs and PTs over time: 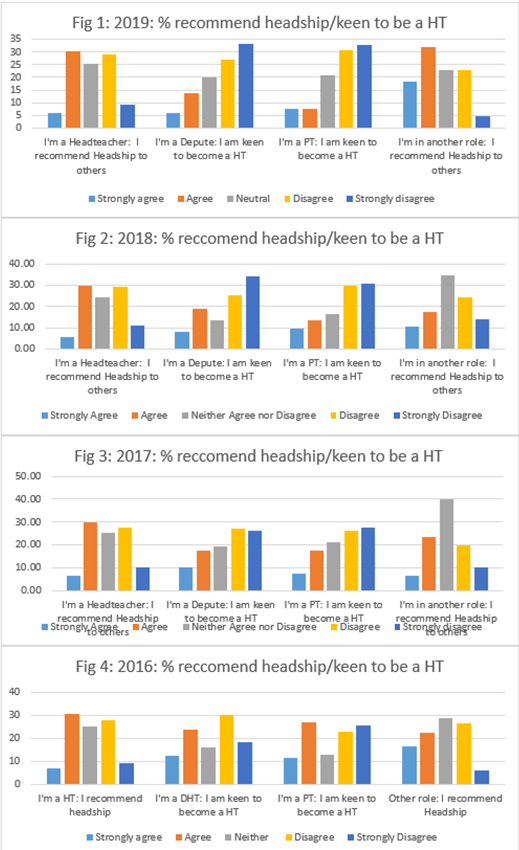 Those who want to pursue headship offered additional comments like:
“I would like to make a difference to a community, the families, the pupils, the professionalism of staff with an emphasis on values such as kindness, fairness, responsibility and love.”
“I have always had a passion to be a HT and lead a school to make a difference for the children and community it serves.”
The much larger group who do not want to pursue headship offered comments like:
“The workload and responsibility of an HT role paired with reducing budgets makes the job increasingly unattractive. I work closely with my HT and have no desire to undertake that position.”
“I used to think I would like to be a headteacher but having seen what is unrealistically expected of a headteacher, the demands placed upon them and the lack of support given for a relatively low salary compared to my DHT wage , I have now changed my mind.”
“Did position as Acting role. Didn’t like the experience. As a mother of young children it greatly affected work/life balance.”
“I was a HT for three years and it was the most stressful period in my career. I have no wish to be a HT again and would actively dissuade others from the job.”
“I see the HT role as being overburdened with elements which are becoming increasingly more removed from learning, teaching and the well-being of children”
“I’m already holding on to my work-life balance by my fingertips. My own kids get a raw deal in that they don’t get enough of my time. I do 50 hours at work but more at home too. Becoming an HT requires even more hours and I’m not prepared to do that to my family.”

… Into Headship
The programme was well received by most of those who had undertaken it.  Many reported that it was worthwhile and that it prepared them well for the role.  The only negative point highlighted by many was the challenging additional workload to be undertaken alongside the heavy workload of their day jobs (although those who had completed the programme were more positive about the workload than those who were currently undertaking it).

It is interesting to note from the responses that those who are currently on Into Headship, or who were but have dropped out, are positive about the value of the qualification – as are those who have completed it – but are much more negative about the manageability of the workload.  This raises the question as to whether, over the piece, the workload becomes more manageable or if those who have completed the course are looking back with rose tinted glasses.  In some senses it doesn’t matter which of these is true…the key points are that the content of the qualification is valued by participants but the workload is an issue when considered in the context of a busy DHT/PT working life.  Ideally, AHDS would like to see a position where time is made to give candidates dedicated study time while they are on the programme.  However, this would need to be achieved by applying additional resource or removing tasks from school leadership teams as the results of the full survey clearly indicate that this capacity does not exist in schools at present. 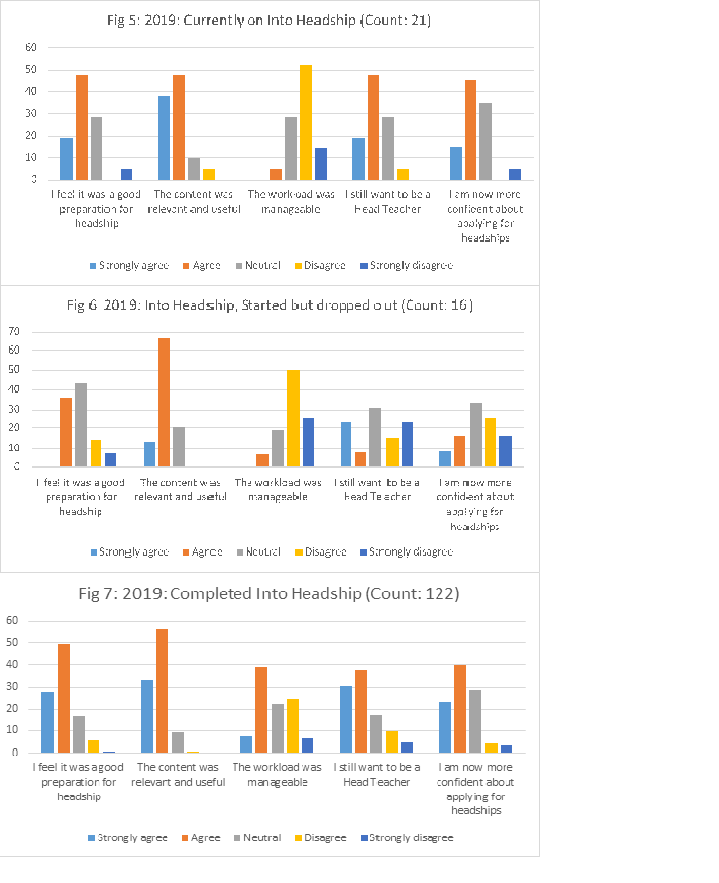 New survey questions
Three new questions were asked about recent developments in the system – SNSAs, RICs and the Empowering Schools agenda.  So, while member views have been gathered, the data relates to 2019 only.

In relation to SNSAs, the overall response was more positive than recent media coverage but this was qualified by many members who indicated that while they felt that the P4 and P7 assessments were appropriate and useful in many ways, they had real concerns about the appropriateness and value of the P1 assessments.

The final question, related to the empowering schools agenda, was added to help us gather member views about whether they are starting to see movement on this agenda. Feedback from the 2019 survey highlights continued scepticism about whether empowerment will be delivered in meaningful way or if it will simply mean more workload with no additional (or further reduced) resources.

Using the survey outputs
As you might know, previous surveys have been really helpful in enabling AHDS to speak out effectively on your behalf – locally and nationally.  Influencing change to policy around funding for the ‘Into Headship’ programme and having a big influence over last year’s HT recruitment report.

This article offered a summary of the returns across Scotland.  We have also produced local reports and discussed these at the AHDS National Council.  National Council members have the local reports for each area, where there were enough returns available, and have been asked to discuss them locally and to consider how best to engage with local authorities about the messages these reports offer.

At the National level these reports have been discussed with John Swinney (Deputy First Minister) and his officials, SCEL team members (in relation to Into Headship and leadership development), with CoSLA and with ADES.

Get all the latest AHDS news via our social media channels