Thank you to the 968 of you who completed our workload survey during February and March.  This short article aims to give you an insight into the results and what we are doing with them.

674 Head Teachers responded to the survey along with 228 Deputes and 53 Principal Teachers.  The remainder fell into the ‘other’ category which included roles such as QIOs.  The survey sought to understand four things:  working hours, what the key pressures are, attitudes to headship and stress levels in the profession.

We asked you “In a typical week, about how many hours do you work?”.  The response painted a very clear picture of long hours, indeed only one response in the whole survey reported working only contracted hours.

Clearly, working hours are a product of the pressures which come with the role.  We asked two questions about the pressures faced by school leaders.  In the first we asked you to tell us “What would make your role more manageable?” This was an open question with the option to add as many items as you wanted, expressed in whatever way you wanted.  Pulling this together into key themes was quite a task but we managed to group responses under a series of common headings.  The seven most common responses were as follows:

We then asked what one thing you would change about your job and were told:

You can see that there is a strong correlation between these two tables – as would be expected – with the top three items the same in each.  In response to these items AHDS will:

-          Continue to press for the tackling bureaucracy agenda to be widened to examine and reduce all elements of bureaucracy faced by school leadership teams.

Also, in relation to the second of the points above we have recently been highlighting the issue with key partners and in the media in an effort to encourage debate about how this might be tackled.  This culminated in AHDS running a second survey – targeted at class teachers – to ask them about their views on the removal of non-contact time.  1600 teaches responded.  A considerable majority didn’t want to see any change to contracts but 50% agreed that individual teachers should be allowed to choose if they wanted to give up their non-contact time (increase hours and receive a pay increase as a consequence).  If this were to be introduced – with appropriate agreements about duration, etc – it would have the potential to have a huge impact on school leader time in class.  We have tried to be clear at all times that in making this proposal we are trying to highlight the issue at hand and open the debate about potential solutions.  We will continue to do so. 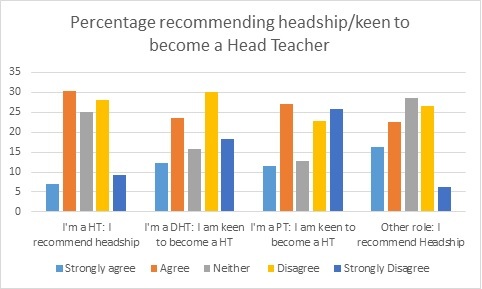 This paints a picture of a HT group which is as likely to recommend against headship as it is to promote it and a DHT/PT group of which significantly more are opposed to seeking headship than plan to seek headship.  This is not a pretty picture.

In addition, we discovered that those who were keen to seek become HTs reported being ‘less likely’ to do so since the advent of the soon to be obligatory ‘Into Headship’ qualification.  We were delighted when the Government decided that candidates would no longer have to pay to participate in this programme but our survey highlighted that this was only one of the key issues in the eyes of candidates.  Crucially, a large proportion were put off by the study commitment and couldn’t see how they would be able to undertake the study required and still deal with the pressures of their current role.  This takes us right back to issues of workload and overload.

The final section of our questionnaire replicated a tool developed by the Health and Safety Executive to help organisations explore perceptions of the workforce on issues known to be key stressors.  The results highlighted that school leaders in Scotland tend to have poorest scores in relation to the demands they face, the control they have over their work and change.

The AHDS National Council discussed the survey results on 7 May – both national results and localised versions for most areas – and agreed that the National Executive would share and discuss this information with the Cabinet Secretary and that local groups could the local reports as a mechanism to highlight and open discussion about key issues facing members.

Get all the latest AHDS news via our social media channels